Posted on November 1, 2010 | 10 Comments
Once again Sylvia Onusic, PhD is our guest blogger tonight. She provides two reviews of books by Jenny McCarthy on autism prevention and healing. This is added to our 50-plus articles on autism (and vaccinations). By the way, our new iShop now has an eBook on Legal Vaccination Exemptions–in case you are concerned about their need, safety and effectiveness.–Augie
Here are Sylvia’s reviews: 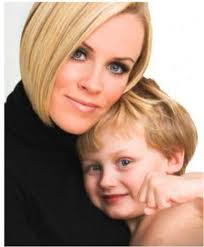 Autism affects one in 85 children and the numbers are increasing. I started reading Jenny’s books because I really knew very little about autism.  I thought it was a mental disorder or developmental disability until I ventured upon Mother Warriors, and Healing and Preventing Autism by Jenny McCarthy.

Jenny has written six books, three dealing with autism.  Mother Warriors gave me my first introduction to autism. After reading it, the subject of autism became very personal, because I realized that not only young children could be its victims, but teenagers, and even adults. One of my family members, age 23,  although not autistic, is struggling with the some of the same problems as these kids had.  He had problems with his vaccines, his formula (soy) as a young child, seemed to get better, but then started to develop lots of bronchial infections.  The final nail was the meningitis vaccine he got at his pre-college physical.  A high honor role student and outstanding scholar throughout high school, he suddenly became unable to function at college, developed mono (Epstein Bar virus) and has not been able to finish his degree or work very much.  All he wants to do is gaming and playing Magic, a card game. MD’s shrugged it off and sent him to counseling.  I realized he has a compromised immune system and now know how to apply the knowledge I read about in Jennie’s books to help him.

In Mother Warrior’s Jennie introduces us to her story, and her journey.  She makes HOPE the ultimate four-letter word. Autism can be healed. Jenny’s son, Evan, developed autism after getting his vaccines. She described his behavior, the typical behavior of autistic kids: no eye contact, toe walking, stimming (repeating behaviors), not responding to his name, no language, fits and rages, and how her experiences with the traditional medical community set her on a journey to do whatever it took to see him well.

Jenny introduces us to the magnitude of this epidemic called autism. She describes many mothers and a father’s journeys with their children, mostly boys, through autism, and how their heroic daily vigilance resulted in “recovery” of their children to the point where the children no longer are diagnosed as autistic and can attend school normally.

Jenny strongly feels that too many antibiotics prescribed for earaches caused her son’s autism at a young age, and the vaccines he received during the early years of life.  A newborn now receives several vaccines at birth that contain mercury.  Pregnant women with amalgam fillings are constantly “off gassing” mercury that crosses the barrier and goes into the circulation of the fetus. Mercury is a heavy metal that kills white-blood cells and damages the immune system’s development.  Thus, from an early age, viruses, bacteria and yeasts grow unchecked by an otherwise healthy immune system, and give off toxins that are circulated in the body.  These toxins can be detected by specific lab tests, such as the Organic Acid Test (OAT), stool tests and hair tests. But Jenny tells us that medical insurance considers autism a pre-existing condition or specifically exempted, so many of these expenses for laboratory testing, doctors fees, supplements, foods, special tutors, etc. are borne by the family. Since autism is basically a condition of the immune system, medical insurance will cover some costs of therapies dealing with treating immunity. 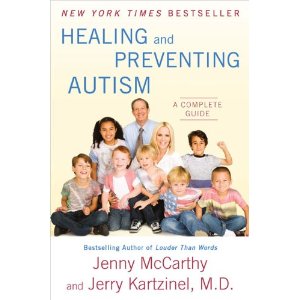 In Healing and Preventing Autism, Jenny McCarthy and Dr. Jerry Kartzinel, an MD and a certified practitioner of the Defeat Autism Now (DAN) methods, carry on a conversation which takes us through all aspects of the development of autism, including possible genetic pre-dispositions, co-existing fungal, bacterial and viral infections, testing, biomedical treatments and dietary treatment, and causes of autistic behavior.  They discuss how early use of antibiotics can generate an overgrowth of candida, a yeast which becomes invasive, can exchange DNA with cells in the gut walls and secrete toxins into the blood stream.

They also talk about many problems with the MMR (measles, mumps, rubella) vaccine, how the vaccine is prepared and why it can damage children so seriously. In very simple terms they explain cellular and humoral immunity, extremely complicated subjects, which the reader can immediately grasp and put to use.  Through their conversations, they explain how vaccines are involved in causing a shift in immunity that makes the system hypervigilant, where the system kicks into overdrive and senses foods, odors or other substances as invaders and launches an attack which results in multi-sensitivity to a range of substances which normally wouldn’t be a problem.

What impressed me most was the amount of therapy/therapists that the children with autism had, but that the therapists made very little progress until the diet and the biomedical treatments were added. The biomedical profile consists of diet, nutritional supplements, oxygen therapy, chelation therapy and pharmaceuticals.

With the gluten free-casein free diet (GF-CF) alone, most children experience improvement, sometimes immediately. Jenny and Jerry also talk about why the diet is effective, how to implement, the low oxalate diet, the specific carbohydrate diet, juicing, eating organic, avoiding high-fructose corn syrup, nitrites and dyes in foods, and how they affect autistic persons.

Supplements were developed (gluten free, alcohol free, etc) which can safely be used with ASD. For many children, but not all, methyl B-12 injections can result in immediate improvements in language or behavior. For others, transdermal glutathione creams help tremendously, the addition of low-dose naltrexone (pharmaceutical) or hyperbaric oxygen treatments and chelation therapy.  But every child is different and needs a special palette of treatments to which he responds.

Jenny and Dr. Kartzinel also talk about other conditions that respond to the biomedical protocol like Tourettes,  ADHD, ADD, asthma and OCD (obsessive compulsive disorder).

This book is not only HOPE for parents, grandparents and caregivers of autistic children, but important knowledge for nutritionists, physicians and teachers. It is highly recommended as essential reading for parents of newborns, pregnant couples and those contemplating pregnancy. You can prevent autism in your child.

Both books describe the journey into effective treatment methods for autism and offers good advice in its prevention.

See more about these books and purchase them.

Our guest Blogger is Sylvia P. Onusic. She holds a PhD from Pennsylvania State University and works in the fields of public health, health education and nutrition. She conducted research in the country of Slovenia under a Fulbright Grant awarded to her by the US Department of Education in the field of public health and later was appointed by the Slovene Government to a position at the Ministry of Health where she worked for six years. Currently she has been researching and writing about fluoride and is a member of the Fluoride Action Network. She regularly writes for Harkeisonline.com, of the Weston A Price Foundation, other online and written publications, and lectures on traditional foods, nutrition and health.

GET THE FREE SAMPLE OF LIVING FOOD BULLETIN ON LACTOFERMENTATION or the entire bulletin emailed to you right now. GIVE ME A SAMPLE OR THE WHOLE SCOOP!

The iShop is NOW OPEN!

PLEASE TAKE OUR ONE-MINUTE SURVEY and get a free subscription to our Journal and a sample of Living Food.–Augie

This entry was posted in AUTISM PLUS ONDs, Prevention and Recovery and tagged Autism, book reviews, health and nutrition, Jenny McCarthy, Vaccinations. Bookmark the permalink.