A short story of my trip to Wayne County near my home is followed by a short review of the book Growing Roots. I will file this post under Augie’s Doghouse– Augie 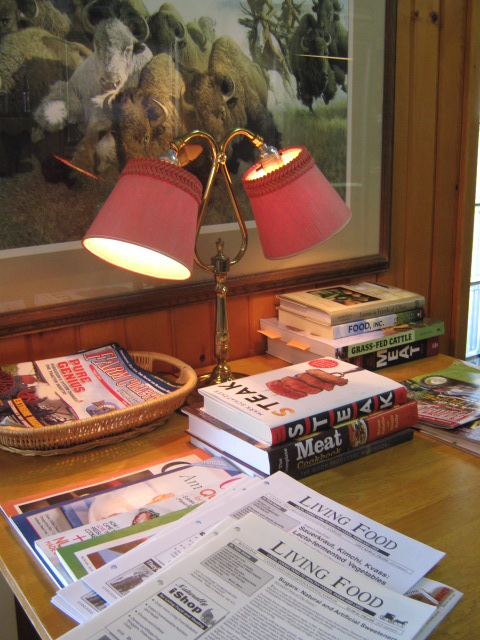 Living Food on the book table at Whitefeather's

Last Saturday, I found myself once again in beautiful Wayne County, Ohio– just minutes from my home. I picked up my quarter of a grass-fed beef steer (with the dog bones for making broth). The picture is a shot of our Living Food

bulletins on the book table. Whitefeather Meats is one of the few remaining slaughter/butcher/retail shops in the area and a lot of cattlemen I know (and will get to know) truck their pastured animals there for processing. As usual, it was exciting to see them again, since I only get to those parts of the woods once a year.

After one of the boys packed in the cold boxes into the rear “cabin” of the Volvo, I motored south on Route 3 toward Wooster and Amish country as planned, but was looking forward to a pop visit at Hartzler Family Dairy, producers of natural, non-homogenized and low-temperature milk.  (I had overheard at Whitefeather’s that it was down the road only five miles– so there was no question I would stop in — I had wanted to get there for several months.) One ice cream sandwich and a gallon of fresh milk later I had twenty less Living Food bulletins and two potential advertisers for our next issue on Fresh Real Milk. Then, I was off to Wooster.

Wooster is very near the center of the world’s largest Amish settlements and  home of Ohio State Ag Research Center and the College of Wooster. I decided to drive past Local Roots Market and Cafe thinking surely it would be opened.

Jessica and me, before bar codes were put on the Living Food bulletins

Local Roots was not only open, they were hosting a Christmas event. Local Roots’ 150 vendor members display their local real foods, from meats and cheeses to specialty breads and canned goods .  It is a unique farmers market; products are provided by producers on a consignment basis and is open three or fours days a week– even in the winter. 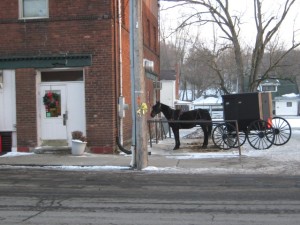 Formerly the General Store in Fredricksburg, Ohio-- next to the Car and Buggy Wash

My first surprise was seeing Sheila Schlatter (I saw her and her husband in Philadelphia at the Weston A. Price Foundation conference last month–and her artisan raw cheese maker son Brian  in Indianapolis last week at the ACRES conference. A little nibble on a sample of the cheese I ran into Betsy Anderson, one of the founders, who introduced me to Jessica Eikleberry the market manager, where they accepted me as a member by special arrangement (I live 40 miles away–considered local) by offering Living Food to their vendors and customers on an ongoing basis.

While I was at the Hilltop Market to put the meat in the locker, I happened to run into Dr. Hoagland, a chiropractor there in Mt. Eaton. We agreed to meet over at his office down the main street two blocks away–  and it turned out he would like to support our publication. Later on I got lost for 30 minutes after dark and ended up by chance at Paul DavidYoder’s diversified natural farm as their family of 14 just finished dinner.

When I got home that evening, this book review came to my attention from Rady’s rocking Food Freedom blog (her RSS feed is found on the left sidebar):

After generations of decline, the number of people in Marin, California who grow food to share or who consider themselves small farmers is increasing. The book “Growing Roots: The New Generation of Sustainable Farmers, Cooks, and Food Activists” includes interviews, stories, photos and recipes from several dozen of America’s youngest and most passionate organic farmers, foodies and locavores — exponents of a new food culture. Author Catherine Leiner crisscrossed the continent in cities, suburbs and rural areas and selected a cross section of farmers, food writers and activists such as Anna Lappé, writer, and Elspeth Hay, NPR, who are walking the talk. It is no surprise that many live in Northern California.

Meet Andrew Coté, owner of the Silvermine Apiary in Norwalk, Conn., test his couscous salad with honey and pistachios or roasted chicken with ginger-honey glaze.

Read “All About Almonds” and meet Benina Marie Burroughs, an almond farmer in Merced, then test her almond pie crust that can be made without wheat flour.

Interviews include Tucker Hemquist of Skipstone Ranch (olive oil) in Geyserville; Alex Hill, a mycologist, and Jamie Peterson of Peterson Winery in Geyserville; Jeremiath and Emilee Gettle of Bakercreek Heirloom Seed Company, who publish “The Heirloom Gardener” in Mansfield, Mo.

These are folks who, like Jeremiath Gettle, are “so thankful to be able to work at my dream job.” Or like Adan, Omar and Pilar Truhillo in Chimaya, N.M., siblings who “work to keep the tradition of the Acequias alive” using traditional methods on land their ancestors farmed for hundreds of years. Try their red chili enchiladas and Desert Biscochitos.

“There’s nothing better on a late-summer evening than going out and picking everything you need for dinner,” as Omar Truhillo said.

The 18 Rabbits company’s granola, energy bars and bread, sold from coast to coast at Dean & Deluca, is a success story based in San Francisco. Alison Baily Verecruysse said she created her granola recipe “because I like people to feel good.”

Katrina Blair of Turtle Lake Refuge farm and school in Durango, Colo., has a graduate degree in biology. She’s also lived in the woods and in a teepee and now owns land that she purchased by serving local wild foods for lunch at a restaurant called Local Wild Life Café, which serves more than 60 guests a day. The café also grows greens and sprouts for the public schools of Durango. Check out her zucchini linguini with dandelion pesto.

“Nature is our best teacher and finest example of sustainable living. When we look outside and observe all the other species living on the planet, we see them eating exclusively local wild and living foods. By imitating nature’s design, everyone benefits,” she said.

“Growing Roots” celebrates modern heroes who are changing the way we look at our food economy. Farming on a scale that is modest by current industrial standards, they have much to teach us about healthful, mindful and joyful farming and eating.

Make sure you peruse our new iShop and join up with us by taking the 30-second survey (free samples).