I’ll warn Journal readers, that this article is filed under both Mixed Nuts and Food Humor— just to provide a break from the frightening aspects of more government Food Safety programs.

No sooner than I finished nearly a pound bag of chocolate almond bark, I had to go and tweet about it on my Twitter and was immediately scolded by a Chicago WAPF organizer who is an holistic health practitioner. She wanted to know what quality of chocolate it was and whether the almonds had been pasteurized. My heavens, Linda, at least it was dark chocolate. And I did ask my chocolatier across the street from the office to research the nutrient destruction of various types of chocolate processing.

This all reminded me to bring Chocolate Fun out of the backroom and put it on everyone’s screens tonight; after all, Easter is coming.

Remember the movie, The Graduate? Dustin Hoffman was told of where future riches lie. PLASTICS, the man said with emphasis. Now, I will use the same emphasis and say CHOCOLATES. No joke, I had heard that chocolate is the best natural anti-cancer food– far above the highly prized blueberry.

Last summer,  I was on a journey to find the finest chocolate on Earth! During the research phase, I was presented with not one but two multi-level marketing chocolate businesses and a direct-from-maker deal.

The first was found at a Saturday farmers market. The Mennonite couple was selling sugar-free pastries and pies, Splenda of course. At the edge of the tent they were selling Kanga water by the glass (that’s another story). Telling them of my chocolate desire, she pulled a bag out of the back end of the truck right next to the raw goat milk. END_OF_DOCUMENT_TOKEN_TO_BE_REPLACED

The latest federal actions that could effectively “tax” cows is much to do about nothing–that is, launching another attack against cows with a trivial pursuit: global warming. It may lead some to conclude it is another assault on food and the family farm and more specifically on the rapidly growing movement of sustainable agriculture and naturally grown foods, small herds and the family cow– but I think it is incorrect to draw a direct link. However, our story covers 400 scientists who “Just Say No” to the business of global warming in general, let alone the cows.

The Journal is a bit slow covering this story on the race to save the planet. It is now certain that a Cow Tax is the latest remedy to change weather patterns, although some have said it is already too late.  On the other hand, we are offered some hope by at least one insider: it may be too soon to panic over cow emissions.

As you may recall, Alabama was the first in the nation to propose a $175 per year tax on every cow to help limit methane emissions late last year. There is now wider concern over cattle exhaust (front end and back end) and I am not so sure it includes emissions from the cow pies.

But now, the feds are involved. EPA, according to a volume of news articles throughout the U.S. this month, gave notice in the Federal Register, to take comments on possible rules that could regulate emissions from many sources–including cows, making it what some have called a “national cow tax”. It was as if hot air balloons were released above Washington, fueled not only by the Alabama winds, but also Nobel Prize Winner Captain Planet himself, only to be shot down by the free subject Report.

(Actually, EPA could likely regulate emissions on larger CAFOs, which has stirred up the mustard. Smaller herds are not likely to be impacted. The Farm Bureau issued a hot air ballon of their own, an exxagerated news release, that started all this Cow Tax talk. This is a common strategy: blowing something out of proportion in order to create alot of noise to stop possible new rules.) END_OF_DOCUMENT_TOKEN_TO_BE_REPLACED

Hazards of Dukes of Raw Milk and Oyster

Well, don’t ya know. Raw milk is drunk all over D.C.–even though it is illegal. The embassies especially hoard it. I suspect the White House, too. If we can get Kimberly Hartke to place a mole there, we could find out for sure.

I know the White House chef cooks with bacon. lard, cream and butter– even those dangerous oysters and all the other good stuff. That is one of the reasons why Bush was real healthy and in such good shape.

Ya see, raw milk is real good for the kings, queens. presidents and ambassadors of the world, but it is real bad for usins.

I know for a fact, that the main milk supplier was right across the street from the White House. It was (is) called Embassy Dairy. They were even hauled into court back in 1954 for illegal transport into D.C. I have one of their steel milk cans [$2, garage sale). I Googled it on the Map back in 2004, and it was there, still in business across from the White House, underground, of course, like so many of Washingtons other underground facilities. It was at the very point of one of those weird symbols you can see from an airplane or a map that L’Enfant had designed. But, when I googled it in 2006, it was no longer there–vanished.

According to the papers, it had just closed down right before I googled it to show our Washington Connections, the real people that teach the nutritional value of raw milk, who are underground in a different sense. I thought bankruptcy was the reason. After all, they deal with the richest people on the planet. Makes perfect sense. Just bought out by a competitor the records said sent to me by an assistant of a Washington correspondent in 2007.

You know I am telling you the truth because you can’t make this kinda stuff up.

Well now, here’s the whipped cream on top of the sundae. Yet another one of the Journal’s correspondents I spoke with face-to-face just the other day– because I was so troubled from the puzzle of these matters. This correspondent had ties with not only the CIA, but worked in the Pentagon and advised the Joint Chiefs of Staff on top secret matters, back when the Embassy Dairy, across from the White House, was hauled into court for illegal transport of the white stuff back in 1952.

Perhaps I should not risk revealing the crown jewel, the creme de la creme, of our private face-to-face– for fear of retribution from the dark side, or maybe some readers.

But, I can’t resist. Our special correspondent had told me the Embassy Dairy no longer appears on the Google map since 2004 because it was highly probable that Homeland Security needed to cover it up. Apparently, being underground was not covered up enough and wasn’t safe and secure enough. Also, the CIA must have had some pretty good intelligence.  After all, raw camel milk in one of those friendly Muslim countries had just been made illegal by their health department sometime after the Google location vanished, but only at the roadside stands that had offered the raw milk straight from camels to passersby for centuries.

Ahh, I said to the informant, it’s the Patriot Act again.

Then, we chuckled, almost to tears.

So I was much relieved from all my troubles about all this, not only being able to tell someone about it after all these years, but also in having what could be an answer to this mystery.

But I am still waiting for a candied cherry, to finish it off.

What will it be next–vegetable stands or oyster bars?

The Drugs I Need (Hilariously True)

Progenitorivox— a 3 minute video on the multitude of pills some take– and their side effects.

more about “The Pills I Need (Hilariously True)“, posted with vodpod

Not long ago in a supermarket not so far away.Help fight the dark side of the farm. Featuring Cuke Skywalker, OB Canola and Dark Tater. Fun for kids of all ages!

Gambling with Your Health? 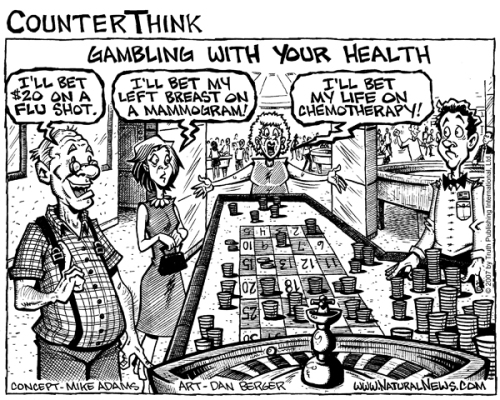 What Drug Cos. Really Want 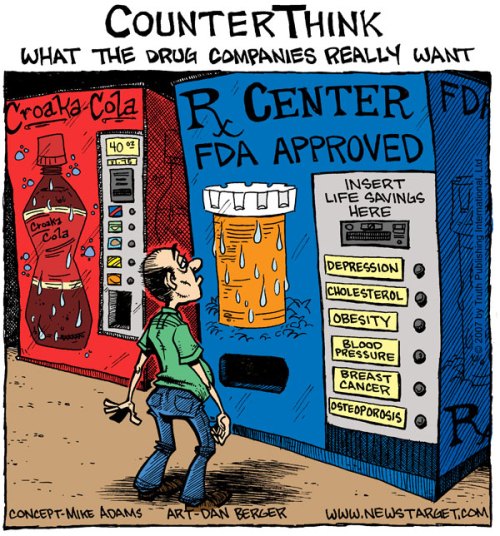