The SWAT-like team raid in December 2008 of a food coop called the Manna Storehouse near LaGrange, Ohio (Lorain County) was heavily covered here at the Journal. Sheriff deputies and agents from Ohio Department of Agriculture and the county health department stormed the home while homeschool was in session with several children and were held at bay in a room for seven hours while agents confiscated food, computers and records. They did not obtain a food service license after it was requested by the health department. END_OF_DOCUMENT_TOKEN_TO_BE_REPLACED

Listen to the 10-minute radio interview

Through a recommendation of one of our Correspondents in Washington, D.C., I had the privilege of being a guest on John Loeffler’s SteelonSteel.com news radio about my take on the December SWAT-team raid on Manna Storehouse, an organic food coop near Cleveland. The Journal has extensive coverage on the incident as I have had contact with the owners the day after it occurred and thereafter.

You can listen here now. The Steel on Steel show is on politics, religion and global affairs can be enjoyed only with an annual paid fee. But John has made this 10-minute segment available to the Journal readers as a thank you to me (and that he might get some subscribers also). But you must log in first using the passwords below.

Go here http://www.steelonsteel.com and go to the October 31 show on States Rights Revolt, — to play click MP3 or RealPlayer. The Manna Storehouse case is at about 21 minutes into the show.

Any of the shows will be available to you until December 15.

Posted in Raid on Manna Storehouse

UPDATE (10/7/09)– THE TRIAL WAS POSTPONED TODAY AND WILL BE RESCHEDULED TOMORROW, AT WHICH TIME THE NEW DATE WILL BE POSTED HERE.

October 6, 2009 – Cleveland, OH – Courtroom View Network (CVN) of New York City has announced that it will video record the trial of Stowers vs. Ohio Department of Agriculture and Lorain County Health Department, according to today’s Journal of Whole Food and Nutritional Health. The trial will be held on  (date pending) at the Lorain County Courthouse, 226 Middle Avenue in Elyria, Ohio.

The court case is the result of a before-Christmas 2008 Lorain County SWAT-team raid on The Manna Storehouse, an organic food coop in LaGrange, Ohio owned and operated by John and Jackie Stowers. The Stowers and their ten children and grandchildren were detained in one room of their home for six hours while the sheriff’s team confiscated sixty boxes of fresh farm food, computers, phones and business records. The food included USDA-certified meat from the Stower’s children’s mini-farm and the nearby Amish community. The Stowers were suspected of not having a retail food license, and the raid was instigated by the Ohio Department of Agriculture and the Lorain County Department of Health. Son Chad, father of the baby and toddler and wife Katie also present during the raid, was serving with the Navy Seabees in the Operation Iraqi Freedom at the time of the incident.

The Stowers are charging the state and county with 119 complaints including unlawful search and seizure, illegal use of state police power, taking of private property without compensation, failure to provide due process and equal protection, and denied their inalienable rights guaranteed under the Constitution, including their right to grow and eat their own food and offer it to others.  END_OF_DOCUMENT_TOKEN_TO_BE_REPLACED

The long awaited trial on the lawsuit filed by Manna Storehouse, John and Jackie Stower against Lorain County and the Ohio Department of Agriculture will open October 8 and 9 at 8:30 am. DATE PENDING. END_OF_DOCUMENT_TOKEN_TO_BE_REPLACED

This is the latest news from BuckeyeInstitute.org who are defending John and Jackie Stowers, who along with their children and grandchildren were terrorized and held captive for over six hours by a SWAT team with guns drawn. They face criminal charges for dealing in fresh farm food for private co-op members at the Manna Storehouse in Lorain Co., Ohio without a government permission slip. 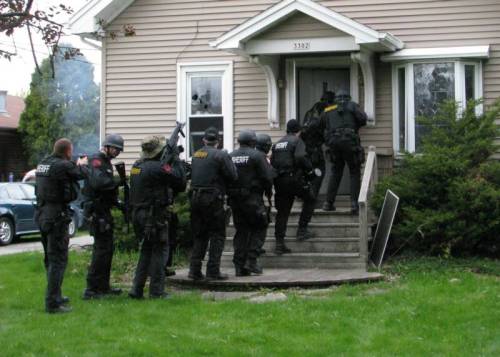 For illustrative purposes only. Not taken from the actual event.

See our complete story called SWAT Team Raid on Homeschool and Food and Health Ministry for Hungry Families with videos and links to the search warrant and sheriffs reports.

Please note that the Lorain Co., Ohio sheriff’s spokesman says this level of force (on a family, children, toddlers and a baby) is normal procedure. Watch the second video with another interview with the family, customers and the sheriff’s office.

Is this image illegal, too? Or is it unpatriotic?

If a dozen or more terrorists held two women, 10 children, toddlers and a baby hostage for six hours, the event would be on television nationwide and on the front pages of newspapers the next day.

I suppose it would not mean so much to me if the victims were not my friends, as if they are my brothers and sisters. In fact, they are probably the most loving family I have met in many, many years. I cannot help but bring the story to the forefront again along with new details and nestling all the legal documents and video together in one place.

In this latest Update video, an investigative reporter interviews the victims and the sheriff’s office and includes video of their children and small farm.

It happened before Christmas 2008 at a food and health ministry for hungry families in Ohio. It was as if the family were bio-terrorists or something.

Three snipers with high-powered rifles were aimed at the home with ten children being homeschooled. Babies and toddlers were inside also. About twelve armed sheriff deputies along with agents from the Lorain County (Ohio) Health Department and the Ohio Department of Agriculture raided and ransacked the inside and held the family for six hours inside a room in their home outside Lagange, Ohio.

Food, computers and phones were seized from their private home along with 61 boxes of grass-fed beef and lamb were taken that was butchered, wrapped and labeled by a licensed and USDA inspected butcher shop and delivered the day before. According to the expired search warrant, deputies were to seize money and bank accounts. The storehouse of organic foods from a variety of suppliers as well as the personal food stock were taken as the terrified family watched.

more about “The Stowers tell their story“, posted with vodpod

Manna Storehouse and the Stowers: Voices of Farm Food Freedom in Ohio!

All over a dozen eggs

The Stowers (Manna Storehouse) vs. ODA Director Boggs. This story has been reported in many places, including the Journal, but I have not seen much in the newspapers. It’s as if the swat-like team stopped in for a visit to investigate. There is much more to this story.

Buckeye Institute President David Hansen and 1851 Center for Constitutional Law Director Maurice Thompson discuss Stowers v. Boggs. This week the Buckeye Institute took legal action against the Ohio Department of Agriculture (ODA) for an unlawful raid on the Stowers’ home and co-op, and subsequent seizure of their personal property. The institute believes ODA violated the Stowers’ constitutional rights. Listen to Hansen and Thompson explain the issue on BuckeyeVoices.

Where's the Beef?–Giving Eggs a Crime?

The latest release on Manna from Farm-to-consumer Legal Defense Fund has prompted another question not yet raised: “Where’s the Beef?”. This gives a new meaning to the motto of Dave– the deceased founder of Ohio-based Wendy’s. Perhaps his words are emanating from his grave. Nonetheless, where is the beef? Surely it was loaded onto an unrefridgerated truck (another violation) and to where was it unloaded? Was it dumped . . . into an unrefridgerated storage rental? Here’s more of the story:

Where’s the Beef?–Giving Eggs a Crime?

The latest release on Manna from Farm-to-consumer Legal Defense Fund has prompted another question not yet raised: “Where’s the Beef?”. This gives a new meaning to the motto of Dave– the deceased founder of Ohio-based Wendy’s. Perhaps his words are emanating from his grave. Nonetheless, where is the beef? Surely it was loaded onto an unrefridgerated truck (another violation) and to where was it unloaded? Was it dumped . . . into an unrefridgerated storage rental? Here’s more of the story: